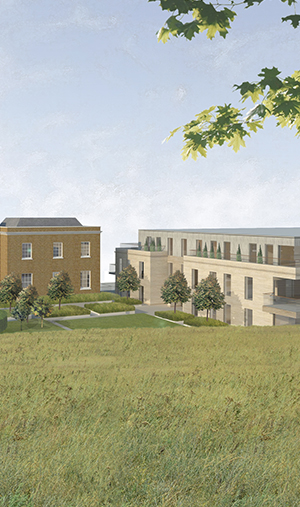 Willcox and Meilwes has won planning and listed building planning consent for the change of use and extension of the Grade II listed Harefield Place to provide 25 luxury apartments following a meeting of the Hillingdon Planning Committee who voted unanimously in favour of the scheme.  The members praised the Architecture and attention to detail shown.

The historic building is Grade II listed and set within an 8 acre site with significant level changes from north to south, adjacent to and overlooking Uxbridge Golf Course.

The original Harefield Lodge was built in 1785/86 by Architect Henry Couchman for Sir Rodger Newdigate. It was significantly extended around 1805 by Jane Parker and again in the early 20th Century.

The proposal is to restore Harefield Place back to its historic and original residential use and setting. The change of use from office to residential will allow the removal of all institutional “features” which have been added over time, while the building was used as a hospital and later as offices. Extensive hardstanding for car parking will be removed and re-landscaped and tarmac driveways will be replaced with resin bound gravel in order to enhance the setting of the listed building.

Harefield Place itself will be carefully and sympathetically converted back to residential use, maintaining and protecting the few remaining original features. The proposed alterations have been carefully considered and kept to the minimum required to facilitate modern day living. Alterations to significant structures have been detailed in a way that they are easily reversible. Subdivisions within principal rooms have been designed so they can be easily removed without damaging any of the historic features.

Carefully reinstating the north facade of the west wing of the Listed Building and allowing the whole of the North-West facade to be fully appreciated again, in the context of a much enhanced landscape proposal immediately adjacent to the Listed Building but also in the wider site has been one of the major considerations of this proposal.

In light of the complex inter-relationships between Green Belt, Conservation, Heritage and Design, whilst respecting the significance of Harefield Place and its history, WaM have developed and detailed a proposal which will preserve the openness and visual amenity of the Green Belt and bring this important asset for Hillingdon back into viable use.