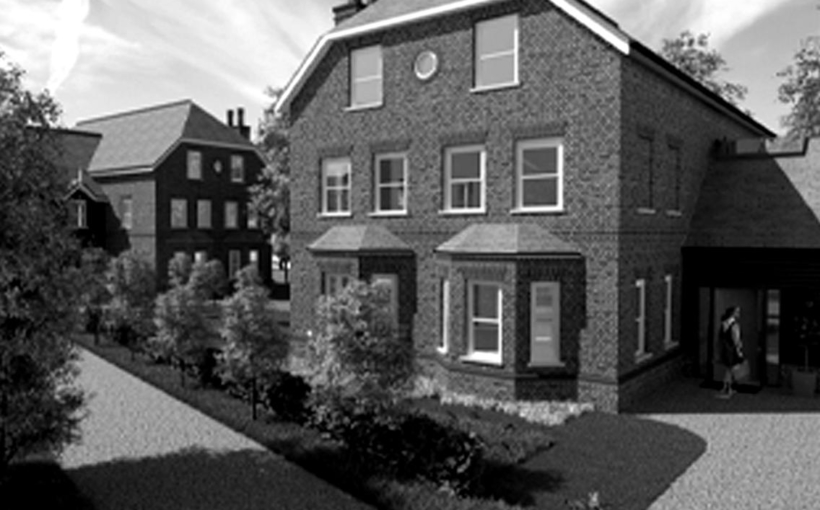 Wycombe End House is Grade II Listed and the area beyond its immediate curtilage is currently undeveloped land within the settlement. The submission follows a detailed and successful pre application process which saw the evolution of the proposals through dialogue and discussion leading to submitted scheme.

During the development of the design, an extensive amount of Site Analysis, surveys and various option studies in both 2d and 3d were carried out. Feedback from the Pre-Application and meetings with Senior Planning Officers and the Conservation Officer has resulted in a refined solution for the site.

The discussions with the Conservation Officer focussed on 2 key areas. The first was the type and nature of the 3 houses in the rear curtilage. It was agreed that rather than treating this as a rural scheme where a set of rural buildings are shown as converted into residential we could in fact consider a development within a urban context. in essence more in keeping with a late Victorian development constructed within as part of the growth of a town with good access via the railways to London. This followed the tradition of building simple yet elegant gothically influenced villas of this period as part of the growth od towns and villages in this area.

We therefore looked at the proposed 3 houses in this context, they are deliberately stylistically the period just after Wycombe End House. The proposal is for a linked pair of town houses with a 3rd villa beyond. The houses are set within the existing mature curtilage of the main house.

By proposing a Victorian Villa with the correct proportions and scale the proposal also sits more comfortably adjacen to thecontext of the neighbouring care home. The strong elements in the facade allow the villas to sit comfortably in their own right against the backdrop of the large adjacent building.

The proposed design of the three houses follows the tradition of detached villas of the mid to late Victorian period, built in a simple pragmatic style influenced by the preceding vogue for gothic architecture, but without elaborate ornament or pointed arches.

Such houses were common across the country from the 1850s to the 1890s, as developers catered for relatively affluent buyers. In villages and towns such as Beaconsfield, houses of this kind were often built for people using the new railway links to live further out in the country while commuting to nearby towns or to London.

The mid Victorian period was notable for the variety of brick colours that became fashionable, and also for houses that were unashamedly simple in their appearance.

Visual interest was often provided by the overall massing, bay windows, and the fine detailing of cut or gauged brick details for window heads.

The present proposals reflect this era of domestic architecture, with a building of relatively modest character, reflecting both gothic and vernacular influences. For instance, the two-thirds hipped gable is a typical vernacular feature and increases the modest, rural character of the building. The single-pane sash windows, with horns on the upper sash, were classic Victorian innovation, while the tall chimneystack with brick modelling and decorative chimneypot were also characteristic of this era.